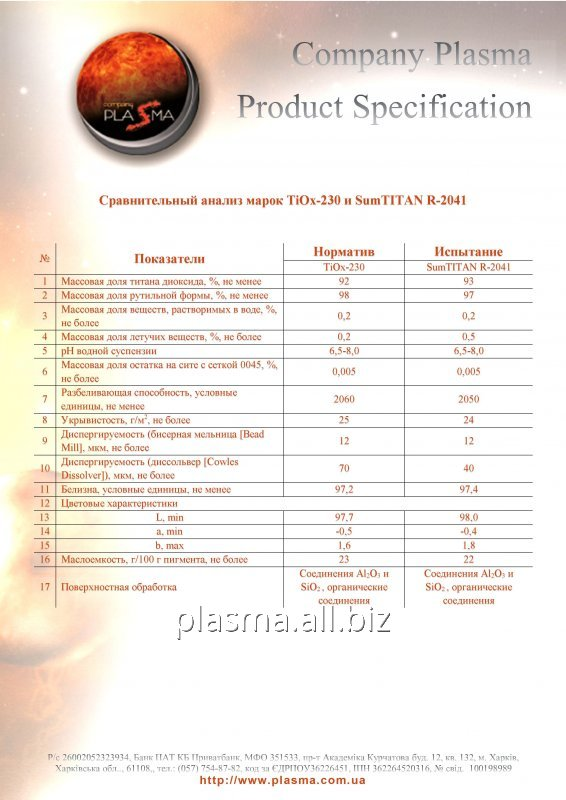 The specific properties of titanium dioxide is characterized by technological progress in various sectors of the world economy, so that the global titanium dioxide market is developing rapidly.

Titanium dioxide is widely used as a white pigment in the paper industry, the coatings industry (paints, etc. ) in the manufacture of synthetic fibers, rubber, plastic, heat resistance and optical glass, white enamel, ceramic dielectrics and so on. d

amphoteric oxide of tetravalent titanium. It is the main product of the titanium industry (for the production of pure titanium are talking only about 5% of titanium ore).

Pure titanium dioxide (TiO 2 ) - is a colorless crystalline solid. Although colorless, large quantities of titanium dioxide white pigment is extremely effective when it is well cleaned. TiO 2 hardly absorbs any incident light in the visible region of the spectrum. Light or transmitted, or refracted through the crystal or reflected on surfaces. TiO 2 - this is a stable (the most stable of all known white pigment), non - volatile, insoluble in acids, alkalis and solutions at normal substance. Titanium dioxide is highly resistant to different reaction compounds, including toxic and contained in the air. Because of its inertia, titanium dioxide is not toxic and is generally considered to be very safe substance. It can be in contact with food packaging and, in certain concentrations, it can be used as a food colorant.
Titanium dioxide is insoluble in water and dilute mineral acids (except hydrofluoric) and dilute alkali solutions.

Pigmentary titanium dioxide exist in two forms - anatase and rutile, and is done by two technological schemes: chlorine and sulfate processes. Both forms can be produced by any method.
In comparison to chlorine sulphate method is more environmentally friendly and perfect due to the possibility to carry out the process continuously, which implies a complete automation of the production. However, the method is selective to chlorine feed, and in connection with the use of chlorine and high temperatures requires the use of corrosion - resistant equipment.
Titanium dioxide, TiO 2 , - compound of titanium and oxygen, wherein the titanium chetyrёhvalenten. White powder, yellow when heated. It is found in nature mostly as the mineral rutile. Melting point - 1855 ° C, the boiling point - 2500 - 3000 ° C. The density of 3. 9 - 4. 25 g / cm³. Practically insoluble in alkalis and acids, except HF. In concentrated H 2 SO 4 dissolved only after prolonged heating. When fused titanium dioxide or carbonic acid with caustic alkali titanates are formed, which are readily hydrolyzed to form orthotitanic acid in the cold (or hydrate) Ti (OH) 4 , is easily soluble in acids. On standing it enters mstatitanovuyu acid (shape), and having a microcrystalline structure is only soluble in hot concentrated hydrofluoric and sulfuric acids. Most titanates are practically insoluble in water.
The main properties of titanium dioxide expressed stronger acid, but salts in which the cation is titanium, also largely hydrolyzed to form a bivalent radical of titanyl TiO 2 + . The last part of the salt as a cation (eg, titanyl sulfate TiOSO 4 • 2H 2 O). Titanium dioxide is one of the most important titanium compounds used as the starting material for the preparation of other compounds it, and partly of titanium metal. Used primarily as a mineral paint, moreover, as a filler in the manufacture of rubber and plastic metals. It is a part of refractory glasses, glazes, forforovyh masses. From it produce artificial gems bostsvetnye and painted.
Of TiO 2 - one of the most important inorganic compounds consumed by modern industry, the unique properties of titanium dioxide determine the level of technological progress in various sectors of the world economy.
Titanium dioxide pigment is the most sought - after commodity on the world market. Global production - 4. 5 million tons.

Titanium oxide exists as several modifications. In nature, there are crystals with tetragonal (anatase, rutile) and orthorhombic (brookite). Artificially produced two more high - pressure modifications - hexagonal rhombic IV and V. It should be noted that Brooke industrially produced little in nature is rare. Anatase form is also substantially lower than for rutile production, as less and less scatter light Weatherproof

Send inquiry
Buy
Contact supplier
Your question has been sent successfully
Consultants of the shop typically answer questions during the day.

We created a Personal Account for you to make the process of buying faster and easier in the future.
To activate, use the link in the E-mail that we have sent to you